As hard working single women living alone and yearning for a much needed getaway, we began looking for a destination directly between our two states. As we both love the country life and  were looking for cowboys or ranchers to corral, we decided on Dallas Texas. It turns out, the distance between our cities was almost the same. Considering we were coming from opposite sides of the country, we knew we had a winner.

Growing up in Oregon, I always knew of my cousins in Upstate New York,. As we had only met once before in our teen years, we were family but not yet friends. In 2017, Meribeth, 2 1/2 months  younger than me, flew to Idaho to visit her mother who was dying of cancer. Keeping in touch daily, we deciphered how parallel our lives have actually been.

Being the conniving cousins we are, with scheming minds we hatched a plan. 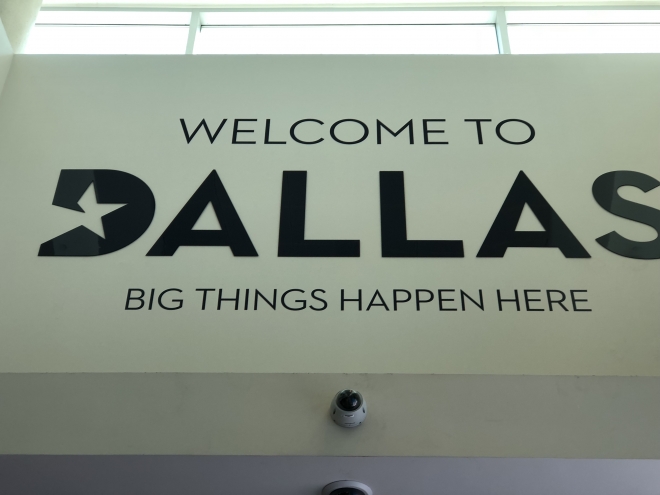 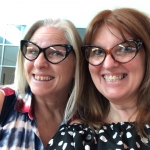 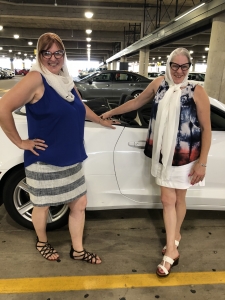 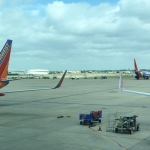 The following year our plan came to fruition. Flying into Dallas Love Airport 30 minutes apart,  the anticipation was overwhelming.  The crowd seemed to fade away as I saw my cousin standing at the gate waiting for me to disembark. After plenty of hugs and tears of joy we finally made our way to baggage claim. All the while rejoicing at the fact that we actually went through with our plans and looking forward to our long Labor Day weekend. Meanwhile Cowboys and Ranchers were aplenty, what more could a single girl ask.

Adventure and flexibility are the words of the day when traveling with me. Little did I know my cousin was just like me! Two hours and 5 credit cards later, we finally drove off in our 2018 Chevrolet Camaro convertible. Wearing our matching vintage 1960’s cat eye glasses “Thelma and Louise” hit the road. Dallas would never be the same. 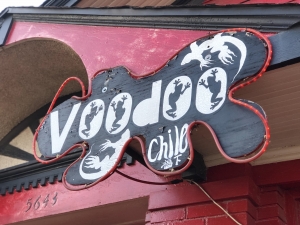 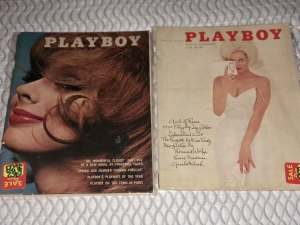 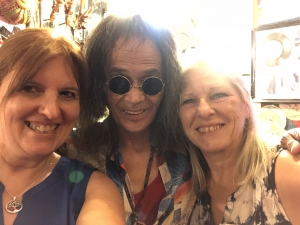 Vintage with a touch of the bizarre. Voodoo Chile, the brainchild of Jimi Fukushita, is a hippie’s paradise. While searching for consignment shops we happened across the website and took a chance. With incense burning, the scratchy sound of vinyl on the record player blasting Jimi Hendrix instantly transported us back to our youth. Paintings venturing on the bizarre scattered throughout the establishment put us in awe.  “Who are the artists of these amazing paintings?” Meribeth quizzed . “I am”  came Jimi’s resounding answer. Entering a room full of bell bottom jeans, go-go boots and platform shoes, we passed through a time portal to the 1960’s. Time seemed to stand still as we reminisced the era  full of fun and mischief.

Each room had its own design on the past, therefore transporting us back to our childhood. Jimi, himself a gem, with his long hair John Lennon glasses and tattooed hands was a precious find amongst the pebbles. After spending time browsing through the array of vintage playboy magazines, we found the ones from our birth months. We joyfully walked out with smiles on our faces and a few dollars less in our wallets. 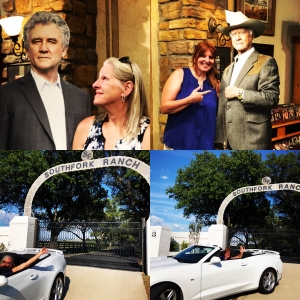 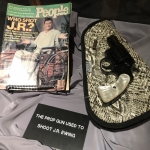 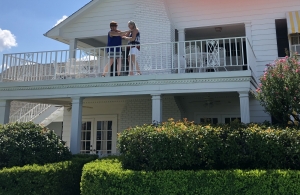 Another reason we chose Dallas stems back to my teenage years. The TV prime time soap opera “Dallas” premiered on April 2, 1978 and ran all the way through to 1991. Having a heart for the bad boys, I had  a crush on the ever scheming JR Ewing, “Who shot JR”, was the question of the decade. Finally seeing the actual location and walking in the very places the actors themselves spent many years was a dream come true.

As the camera pans the skyline of the city, you hear the majestic sounds of the trumpets playing the theme song. The mansion sitting in the middle of nowhere looking as grand as any Castle in Europe. As you drive in, the Estate becomes smaller until you realize it’s just a home, but what a home it is. We became instantly transported into the realm of Ewing Oil .

I was a teenager once again as time seemed to fade away and I was in the presence of the Ewings once again.. During our private guided tour, we had drinks with JR in the parlor and re-enacted the balcony scene when JR threw Kristen into the pool. A check off my bucket list for sure, thanks to our amazing guide Bette. http://www.southforkranch.com 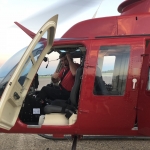 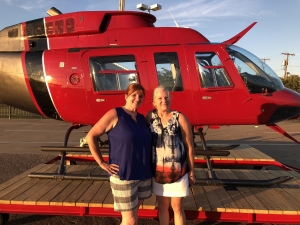 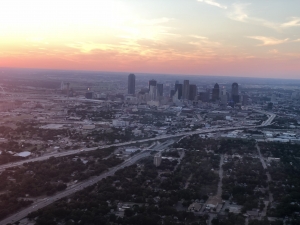 After happening across a helicopter ride in Groupon, I told Meribeth who eagerly stammered “Book it Dano”  Before the flight, a questionnaire was emailed to us. Upon answering the queries as to why we were taking the tour, the owner contacted me. So enthralled by our story, two cousins meeting again years later, Kelley from “You Take Flight”  offered a complimentary upgrade. Arriving at the airport our hearts were in our stomachs, this was a first for us both. After a brief safety talk, we took to the skys on our VIP helicopter tour to view the city skyline at sunset. Ecstatically blown away by the experience,  we were in complete bliss by the time we landed

Owner Wolf Haeberle talked his wife Kelley into buying a Jet-Turbine Helicopter and moved it into a hangar at the Dallas Executive Airport. “What will we ever do with that”, she enquired. Offering rides to tourists and locals alike throughout the day and evening, the couple have found their niche.. This is a must on anyone’s bucket list! http://www.youtakeflight.com 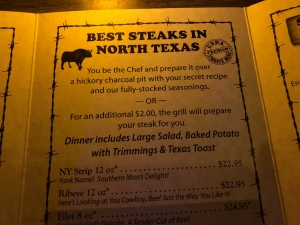 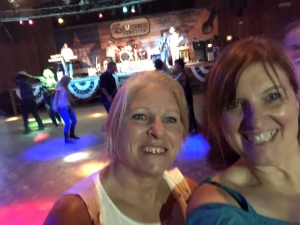 As our time was coming to an end, we ventured out  to visit a lifelong friend of Meribeth’s. Having moved  to Texas years before they offered us a place to stay. Since it was the weekend, they took us to a local Honkytonk where their Southern hospitality was in check.  With the offer to cook your own steak over the open grill for $2.00 off your bill and live music it was the ultimate Texas experience. As the dance floor filled with old and young alike, the band played both waltzes and boot scootin’ music.  A treasured memory for years to come. 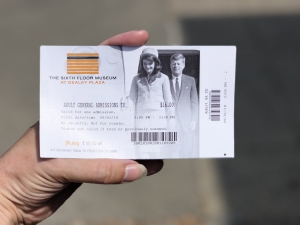 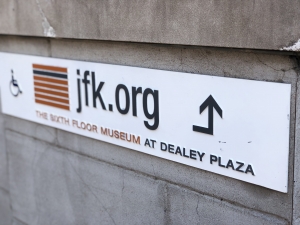 History. It can be either good or bad. But it’s what you take from it that determines the outcome for years to come.

As Americans, we’ve seen the pictures and heard the stories of President John F Kennedy’s assassination. November 22, 1963, our country went into shock. The nation mourns as  TV anchors and radio DJ’s announce, “The president has been shot”. Meanwhile the city of Dallas went into a complete panic. Shots were heard coming from a nearby building and from the grassy knoll below as people screamed and ran away from the scene.

Both a treasure and a heartache, the JFK memorial Museum aka 6th Floor Museum, is a must see in Dallas. As you enter the building you are greeted with a set of  earphones whereas you can enjoy the self guided tour at your convenience. Walk through history as you witness the joy turn into panic on the street just below you. Stand in the very location, the corner window, where John Wilkes Booth allegedly used the infamous shotgun. The white X on the street below marks the exact spot the car was located when the president was shot. http://www.jfk.org 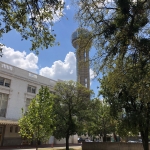 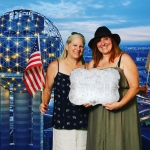 Standing 561 feet above the city, Reunion Tower is one of the most recognizable buildings in all of Dallas. Built in 1978 as an observation viewing point, the tower hosts restaurants and shopping alike. Take the time to enjoy fine dining at Wolfgang Puck’s Five Sixty or enjoy a casual meal at Cloud Nine. Not hungry or just looking to add to your visit?  Witness the 360 degree view from the GeO-deck, an indoor/outdoor observation platform. Adults and children alike will enjoy playing interactive games to view the city and surrounding areas. On a clear day you can even see Fort Worth 32 miles away. http://www.reuniontower.com 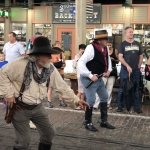 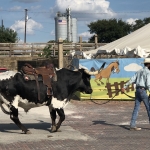 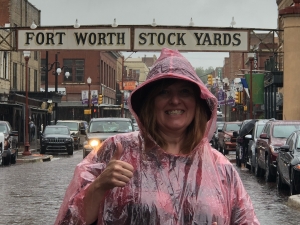 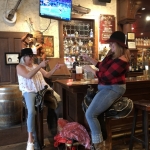 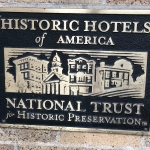 We venture out to Fort Worth for our last two nights. With rain in the forecast we put the top up and hunkered down for a good old fashioned summer storm. As the rain began pelting, we found ponchos for $3.00 each and bounded down the streets of the Stockyards arriving  just in time to see the daily Cattle Drive wandering through the main street. What comes to mind when you hear the word stockyard? Amongst the constant prattle of horses and cattle being sold at auction, there’s straw strewn about on the floow and the smell of an old musty barn. Normally you would be correct, but that’s not the case at the Fort Worth Stockyards anymore. The old Stockyards have been turned into a tourist attraction with shops, hotels and a petting zoo.

While we waited out the rain, Meribeth opted for shopping. Meanwhile I  watched an old fashioned shoot out in the main building. After the show,  on a mission to find a cowboy hat and boots  we wandered down the main drag. Hat finally purchased, we entered the Stockyards Hotel, known for its infamous celebrities, Bonnie & Clyde and Butch Cassidy to name a few. After taking a small tour of the hotel,  we belly up to the bar for the famous Margaritas and Texas Nachos. Saddles for seats, and country music blasting in the background this completes our Texas experience. Although we only met one guy between the two of us, it made our visit a success.

TILL WE MEET AGAIN 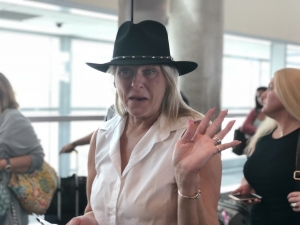 Finally, as every good thing eventually does, our time had to come to an end. With tears in our eyes and glowing faces we said our goodbyes. My one time distant cousin has become my closest friend. Although we didn’t know each other growing up, the time and distance no longer matters. Family or not, we will always have a special bond that no one or nothing can take from us,