An opportunity to bond with your child by taking a road trip together? That’s exactly what my 20 year old daughter Emily and I did this past weekend. Road  trips are tough, they can either break you, or make you stronger.

Our journey began  early Thursday morning, bounding down the freeway in the pouring rain with anticipation and excitement. I offered a San Francisco retreat to my youngest, as a birthday and high school graduation gift. “Her city”, as she calls it, is a favorite destination. Trying for her driver’s license in just a few short days, I let her take the wheel. With confidence level high, adrenaline kicked in and we made it to our hotel approximately 12 hours later. 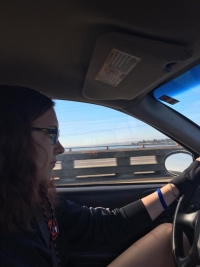 Naturally when on holiday, one tends to sleep in, not this duo. Up in the wee hours next morning, we prepared for our first day in the city. Staying an hour outside, we opted for public transportation, as neither felt like driving. We figured it a breeze, coming from Portland, where our public transportation is one of the best in the country. Now as a rule, I get lost. It’s not something I’m proud of, but I accept it and sometimes it turns out for the best. First, driving in circles before finally coming to the parking garage. Second , asking directions to the terminal from said garage. Third, asking how to use payment machine for tickets. Fourth, insert debit card, paying $20 for two tickets for BART to the Embarcadero.

We completely overlooked sunscreen, as true Oregonians not used to the sun, expecting cool and overcast weather. With GPS in hand and memories of past trips, (after a few turnarounds), we walked a mile to our hop on/hop off tour bus.  http://www.city-sightseeing.us   The open top is the funnest place to be on the hop on/hop off bus. Listening to the guide provide local knowledge of the area, the excitement overtakes. You completely forget the sun is beating down and ignore the wind blowing your hair into knots. Having taken the entire two hour tour, from Fisherman’s Wharf to The Golden Gate Bridge we hopped off where we began. 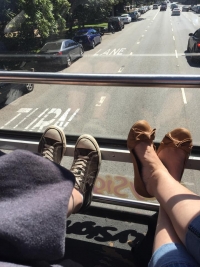 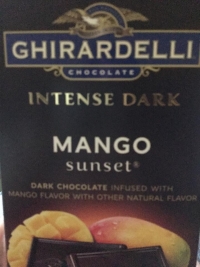 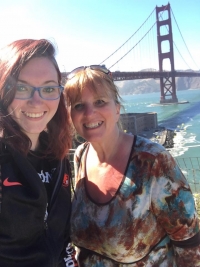 After traipsing up the hill to Ghirardelli Square www.ghiradelli.com to indulge in chocolate. We ate at her favorite diner, Lori’s, Http://lorisdiner.com before we found our way back to BART. Friday end of day, people were wall-to-wall. Thank goodness we were in no hurry, as we waited for a “not so crowded” train. Having paid for parking with my ticket, I insert my ticket in machine again to cover cost. Another $20 later, I had a ticket that would last two more days. Frustrated tired and hot, I handed the ticket to a mother and her children at the pay station and said enjoy.

Nighttime showed just how much the sun had kissed our white bodies. Emily’s note to self, “do not wear jeans with rips in them while sitting in the sun, your legs will come out looking like zebra stripes”. 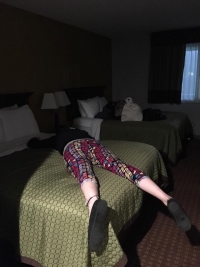 WE CALL OURSELVES ADVENTURERS

Now some may say we are gluttons for punishment, but we call ourselves adventurers. With a two day pass for the bus, the next day we drove to the city. Winding our way to Golden Gate Park, we chose to park in the garage. Hopping on the tour bus, we hopped off at the next stop, the Golden Gate Bridge. Here we caught another tour bus to Sausalito. Fantastic little spot, influences of Spain and Italy can be seen throughout the village. Spent an hour or so here, drank a delicious mocha and ate decadent pastry, relaxing by water’s edge. Of course we HAD to visit Ghirardelli once again, my son asked for a chocolate bar, darn kids. Souvenirs bought, pictures taken, we hopped on the last bus back to our car and spent time in the park. 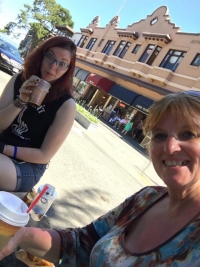 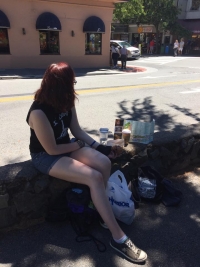 Pizza in our hotel room, nursing sunburned bodies while resting swollen knees and ankles, opting for an early departure Sunday morning. We made good time to the Oregon border, Emily taking over just before we rolled over to 1,000 miles traveled. We would be back early to rest and relax before Monday’s daily grind, or so we thought. A typical 20 minute drive, turned into two hours in the belting sun, stop and go, up and down the mountainside. Once through, our first stop, the local Subway store, for water and facilities. I took over driving from here as Emily was exhausted and needed rest. We finally make it home, 13 hours after we began our trek. All in all, it was a glorious opportunity for mom and daughter to just be our crazy selves, no judgement allowed.