Nestled halfway between Portland and the Pacific Ocean, with vast vineyards and open pastureland, sits McMinnville, known as the Heart of Oregon Wine Country. Although this area is know for it’s wine, there is another reason to visit. Just outside of town. The Evergreen Aviation and Space Museum, http://www.evergreenmuseum.org is a testament to the men and women whom have devoted their lives and careers to reaching the ultimate goal of pursuing the never ending dream, the longing for man to fly. Founded in the memory of Captain Michael King Smith.

After winning the bid in 1992, for  The Hughes HK-1 Hercules, nicknamed Spruce Goose, Captain Smith and his father, un-assembled and transported it, by barge, up the West Coast from Long Beach, California to Portland, Oregon.  9 years later  “the flying boat” was reassembled in it’s new and final home, a hangar built specifically for her, in McMinnville Oregon.

The Spruce Goose, is the largest, by wingspan, 239 ft, airplane ever built. Made of 93% wood, built to carry 2 Sherman tanks and 750 troops during WWII.

The Wright Flyer, exact replica of the Wright Brother’s first plane, as well as the Curtiss JN-4, dubbed the Curtis Jenny, and Sopwith Camel are on display. The DHC-4, tagged the “flying coffin” by the pilots who flew it, and the Messerschmidt BF 109 G-10 Gustav, are the actual planes flown during WWII. Sitting just beyond, a B-17 Bomber.

US Military Veterans act as docents, offering guided tours for free each day.

Space, man’s ever longing desire to know what, if anything, exists beyond. Transform yourself into another place and time as you enter the Space Museum. Feel the change of atmosphere as you venture through the hands-on exhibits. Military Rockets to Space Capsules, Space Suits to what one would perceive to be the Death Star. US Military helicopters to Fighter Jets, including Cpt. Michael King Smith’s actual F-15 Eagle. Coming soon to the museum, a Desert Storm Veteran, the A-10 “Warthog”. 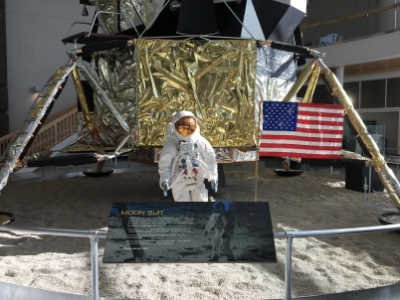 With a commercial airplane embedded in the roof, the water park is a fun and exciting addition to the museum visits. Water slides, with names such as, Sonic Boom, Tailspin, Mach 1, and Nose Dive, protrude from every angle.  Splashdown Harbor, a Leisure Pool, the Vortex Pool and a Youth Slide, are also part of the fun. The H2O Hands On Science Center, offers kid friendly learning experiences.

Just outside, a playground, a beautiful chapel, old military tanks and even more planes.  Also available, a picnic area and vineyard.